I have always found Outliners useful. Thus I have used Ecco for a long time (and it is still installed on my computer, though I rarely use it.[1] Here is a good review of some applications dedicated to outlining.[2]

One correction: TkOutline, one of the few one-pane outliners available for Windows and Unix, also runs on the Mac with the Platform Independent starkit (tkoutline-0.93.kit). At least it used to. "For Microsoft Windows, Tkoutline is distributed as a single file, installation-free executable. For other platforms (Mac, Linux, etc.) it it requires just two files—a platform dependent interpreter and a platform independent “starkit” that is executed by the interpreter." 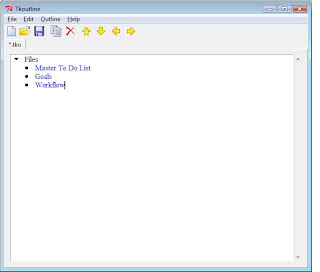 It's too bad that it does not seem to be actively developed anymore. It still is one of the few outliners that can link outlines by wiki-links, which is very good for todo lists, for instance. (Jreepad is another. It's based on Treepad, a two-pane outliner that can be used as a one-pane outliner because it has three views: tree only, article only, and tree and article. I find Jreepad cumbersome—and not just because it's written in Java). But dedicated outliners are not the only game in town. Since ConnectedText has now an outliner that allows linking to topics, I don't miss the dedicated variety any longer. 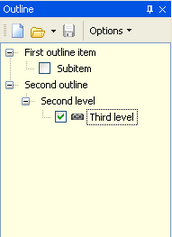 1. See also my earlier post on Outlines and Meshes.

2. It seems to be motivated by the recent devastation of the Wikipedia Outliner page, which has been edited so as to remove everything that made it useful.
Posted by MK at 8:49 AM