This post by Michael Leddy advocates something called "Amish Computing," a phrase that seems to come from Paul Ford.[1] It's related to the Lo-Fi Manifesto and Living in Text Files.[2]

I have some sympathies for this approach, but I am more like the Amish who own a car (but remove all the chrome and other adornments). That's another way of saying that I like the wiki-approach which is very much like the pure text approach with a database and structural make-up (and all the affordances of these conveniences).

1. See also Ford's Followup/Distraction and Writing in an Age of Distration, as well as The Myths of Multi-Tasking on this blog.

A (Very Nice) Introduction to TinderBox

See Part 1 and Part 2 of an introduction to Tinderbox by someone who sometimes does me the honor of commenting on this blog.[1]

I myself recently tried Mac OS X just to try out TinderBox, DevonThink and Scrivener. But TinderBox and DevonThink never "clicked" with me.[2] Neither did Voodoopad, for that matter. But if you are interested in TinderBox, I know of no better nuts and bolts introduction.

The Tinderbox Website keeps threatening that it will come out a Windows version of this program, but in the many years I have followed it, none has materialized. But, even if it were to appear now, I doubt it would change my ways.

1. See also On Grandview, which points to an earlier post on this blog.

2. See also On Dating DevonThink and Notebook, Voodoopad and Wikipedia.
Posted by MK at 1:37 PM No comments:

No further comment!
Posted by MK at 1:59 PM No comments:

See also the earlier post Neo Alphasmart. But see also this brand new Psion, which is not cheap. It costs more than $700.00. While it may be more sexy than the Neo, it seems to have just 2-4 hour worth of battery life. The Neo runs for about 700 hours (or almost a year) on three AA Batteries.

It fits well with Lo-fi computing.
Posted by MK at 6:03 PM 4 comments:

How Not to Be a "Linguistic Snob"

I came across this today. I was particularly annoyed at this:

What is presented below are my personal observations about some of the programs I have investigated for personal wikis. Now, perhaps I've misunderstood what a program does. But overall, I think the following reviews and concerns are legitimate enough.
These issues might not be a problem for some folks. It really depends on what you want the wiki to track, do, function, etc.
Connected Text–Web - Site uses poor spelling and wrong English. Not to be a linguistic snob, but if they don’t understand how my language works, can they understand what I DO with that language? And, that raises the concern about correctness of programming. If the documentation is wrong, is the programming?
Now, some folks would take a look at Microsoft and say this point is moot. The difference is one or two people writing a program, vs. and entire organization backing the program. How long until a flaw is corrected? How much tech support can a single person be if they are programming, working on a job, caring for a family, and more?"

This passage itself is not a paragon of correct English. What does it mean to say "what you want the wiki to ... function," for instance? But, more importantly, to say that a non-native speaker's shortcomings in English indicate anything about their thought processes is chauvinism at its worst.

The program is developed by Brazilians, whose Portuguese is—I would bet—much superior to this Blogger's English. And last time I checked, English is not a required skill for programming. It can be done by Brazilians, Germans, Indians, and members of any other language group. Some of the most important thinkers did not speak English either. Indeed, I think most of the most important thinkers would have used "wrong English," simply because they could speak little or no English at all.

I, who have actually used this program for more than four years, have never seen it crash and can assure you that it does what I want it to do in any language I am able to use (including English).
Posted by MK at 1:04 PM 2 comments:

Do typewriters beat computers? Some people seem to think so.

I am not one of them, however, even though I almost got an old IBM Selectric recently for sentimental reasons. When I wrote my dissertation I really wanted one, but couldn't afford it. But now even free seems too expensive.
Posted by MK at 6:44 PM No comments:

KV asked how Luhmann avoided a hierarchical structure in his Zettelkasten. The answer depends to some extent on how strictly you interpret the word "hierarchy." In some sense, any ordering that has 1 followed by 1.1, 1.1.1, etc. may be interpreted as hierarchical, as "1.1.1" can be viewed as depending on 1. But it does not have to be so interpreted. It could simply indicate a sequence.

However, this is not the kind of hierarchy Luhmann wanted to avoid. What he had in mind is a more substantive hierarchy, where one concept contains other concepts or where all the concepts in a certain domain depend ultimately on one basic concept. Trees represent this kind of hierarchy:

His Zettelkasten does not have this structure of an acyclic graph, but is rather a flatter graph, in which there is not one central node or concept, but in which everything can refer to everything. Like this: 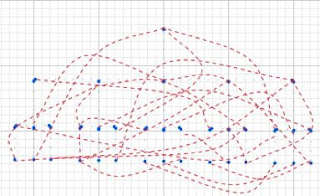 It's more like a network. Luhmann himself used the metaphor of "spider web."

A tree is in fact only one (very specialized) form of a graph, as you can see from this:

Outliners basically follow the tree model and have difficulties accommodating others.

Luhmann's system is not particularly tied to any of these and can accommodate all of them to some extent. Therefore, again, he does not have to avoid any hint of hierarchy.

See also Outlines and Meshes and Outlines and Hypertext. Brainstorm may be viewed as a non-hierarchical outliner.
Posted by MK at 6:08 PM 1 comment:

Thanks to Brownstudies, I took a closer look at James Fallows blog entry in The Atlantic about thinklinkr, even though I had heard a number of discouraging things about it already.

In researching the background of Fallows' blog entry, I cam across an interesting post on the lowly yellow legal pad that might perhaps also interest other people.

Fallows has written a followup to the first blog entry More on Grandview and Thinklinkr that references Welcome to Sherwood, which I called attention to earlier.

I would really like to know what Fallows thinks of desktop wikis, and in particular of my favorite application ConnectedText, which includes an outliner more capable than thinklinkr.
Posted by MK at 10:16 AM No comments:

Here you can find an interview with the creator of Scrivener. Not uninteresting! Still no close equivalent on Windows ...