I posses both an Alphasmart Neo and an iPad 2, and a rooted Nook Touch. Here is my quandary, though "quandary" is perhaps an exaggeration: which to use when traveling. The Alphasmart is rather bulky, but it has a better keyboard than any Tablet. One of the reasons why I think about this is this post about the Neo 2. But the keyboard on some tablets is very good. I bought the Alphasmart Neo many years ago. Whether I would buy it now for $169.00, while there are perfectly good tablets available for $199.00 (like the Galaxy Tab 2) is a moot question. I wouldn't! But since I have one already I think I will use at home, away from my main computer as a "distraction-free" writing machine. We'll see.
Posted by MK at 10:44 AM 2 comments:

Herman Melville said: "There are some enterprises in which careful disorderliness is the only true method." This contrasts sharply with Descartes who meant by method "certain and simple rules, such that, if man observes them accurately, he will never assume what is false as true." Note-taking requires both at different times—or so it seems to me.
Posted by MK at 4:54 PM No comments:

Folding Text is now available in the Apple Applications Store. It costs $14.99.[1] If it were cheaper, like half the price, I would have bought it already. I am still thinking whether I really need a rudimentary editor that duplicates what other programs do which I already own." The say, the program is "surprisingly adept" and will make you "write clear, focused documents." If it did, it would be worth a hundred times its price, but I am afraid writing "clear and focused documents" is the responsibility of the writer, not of the software. 1. Added on Wednesday, October 17, 2012: It seems that $14.99 represents the "40% Off Launch Sale," and that the final price is even higher.
Posted by MK at 8:32 PM 5 comments:

On How I Won't Measure My Life

How Will You Measure Your Life? is obviously not a book for someone like me. It is full of useless platitudes: "It's important to understand what makes us tick," meaning "understand what motivates" us. You don't say? "It's difficult." Indeed! "We can learn from how companies develop." Really? I rather doubt it. "We need to employ, a combination of "emergent and deliberate strategy," i.e. between what's happening and what we want to happen. What else is new? "A strategy ... is created through hundreds of everyday decisions about how you spend your time, energy, and money." No, that is your character, not necessarily your strategy! "Intimate, loving, and enduring relationships with our family and close friends will be among the sources of the deepest joy in our lives." Perhaps, but they are also often the sources of the deepest misery in our lives. In any case, this advice is as trite as it gets. The same is true of other jewels of advise, such as "sacrifice and commitment," the "Greek tragedy of outsourcing," "understand your capabilities," "never outsource the future," "enterprises and families are very similar" in wanting their junior members making the right choices, "staying out jail." Most important for my initial interest was the question about questions. I wanted to find out about what interesting things he might have to say about questions. But here too the book falls flat: "If we ask the right questions, the answers generally are easy to get." I guess that is the kind of advice to expect from a boy scout leader (see p. 153). The $10.00 I spent on this book were not well spent. But I learned one thing from this experience. I should resist buying a book electronically on one intriguing hint. Had I gone to the local bookstore and browsed its contents for ten to fifteen minutes in the book, I would have realized that it wasn't for me, that it was over-hyped (if that is not a pleonasm). It is like almost all "self-help books." It's not that I have something against the genre of self-help books. I did like: Ari Kiev, A Strategy for Daily Living. The Classic Guide to Success and Fulfillment. New York: The Free Press, 1997 (originally published 1973). On the other hand, given the cost of gas, it was not such a large monetary mistake. What I consider the bigger mistake is the time I wasted reading it.
Posted by MK at 12:12 PM 2 comments:

Read this recently: "Paraphrased slightly, he [Clayton Christensen] said: “Questions are places in your mind where answers fit. If you haven’t asked the question, the answer has nowhere to go. It hits your mind and bounces right off. You have to ask the question – you have to want to know – in order to open up the space for the answer to fit.”[1] This expresses very well in modern idiom why the unexamined life is not worth living. The problem is not that there are not enough answers, but that there are not enough questions. Furthermore much that counts "answer" is really questionable. I am not given to reading books about business, even less to reading those who address "the business of life," but I will read How Will You Measure Your Life?. In fact, I have just downloaded a copy for my Kindle. 1. Via Signal vs. Noise.
Posted by MK at 10:44 AM No comments:

Thanks to my friend Jim, I just became aware of this new application by the Scrivener folks. It looks very interesting: 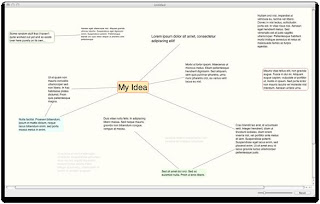 "The idea is simple: when I'm "brainstorming" ideas (I hate the word "brainstorming", by the way, so please feel free to suggest a better alternative), especially for writing but to a lesser extent for programming too, I tend to take a piece of A3 paper and just write down ideas all over it, in no particular order, making notes off of one idea and drawing lines between them where necessary. So the concept was to take that process and put it in a really simple application; something that wouldn't be any more difficult to use than paper." Put differently, it is a mind map program that does not restrict you to a single min map, but allows you to have many different centers of interest (or ideas) in one sheet that can be connected or unconnected. A short list of the commands is in the blog post. But I have only played with Scapple so far. The simplicity of the program appeals to me. Most other mind map programs are too bloated and ... well ... aim at replicating fancy visual mind maps. Scapple has a text-like fee. The developer says: "I wanted an easy way to then take all those notes and dump them into a text file in some sort of order, and I have yet to implement that, so I'd be grateful for any feedback on how that might best be achieved. (It's therefore currently of limited use for real-world work.)" There are, of course, already, suggestion on the board for putting all the feature in that would make it a mind map program like any other (with shapes and garish colors). I hope the developer will resist those suggestions and keep it simple. This sounds like a great idea. Furthermore, since it is created by the developer of Scrivener, it will interact with future versions of that program. Apparently, it already works with the recent Beta. Even though I have played with it only for a very short time, I like it a lot and recommend very highly that you take a look at it. PS: As to the price: "We haven't settled on a definite price yet, but I'm thinking that it will be around $10 or just under." $10.00 seems more than reasonable.
Posted by MK at 10:04 AM No comments:

Frederick III, later Holy Roman Emperor, kept a Notebook. Here is one page of it: 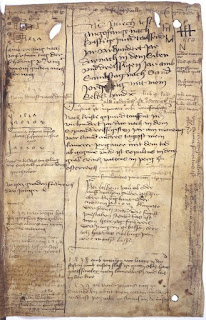 For a transcription of this page (in German), see here. Apparently, this page contains the first known occurrence of A.E.I.O.U.AEIOU, or A.E.I.O.U.. What interests me more is how little the (dis)orderly arrangement of notebooks seems to have changed in more than 500 years. Frederick III's notebook pages were pergament, not paper, though paper was by this time widely available.
Posted by MK at 9:27 AM No comments:

An Outline in Cicero

As I have argued in a previous post, what we call "outlines" today are are a certain typographical convention or, perhaps better, a convention in how we represent in writing hierarchical lists. Such lists can already be found in antiquity. Her is one example. Cicero, in the second book of his work on Moral Ends presents the following classification of views on the highest good:

A. The highest good is to live in accordance with nature

After giving this account, he "narrows down the competition," that is, he tries to show which theory is actually true. The details of this argument shall not concern us here. All that interests me in this context is pointing out that he proposes what we might call an outline, though he does not, of course, present in the form of an outline. All we have in a modern translation is two paragraphs, in which he states this classification. It is by the way not unambiguous (and my particular reconstruction can be criticized).

But even the organization into two paragraphs was probably not there when Cicero wrote this. In fact, there was no mark for the paragraph or even spacing between different words. It was all jumbled together as one continues string of letters.

There is no doubt in my mind that the convention of putting spaces between words, starting new paragraphs with a new line and indicating clearly the different headings of the classification are making it easier for us to read and understand what is said. They also make it easier for us to think about the matter at hand. But it cannot be denied that they are not absolutely necessary either. Clearly, Cicero (and Cicero's contemporaries) could do without these conventions. But outliners, in the end, are based on a convention that is similar in kind to the convention of putting spaces between words when writing. It's a kind of microformat. This microformat is superior to the lack of format in Cicero, but it represents in no way a new way of thinking.

I do not claim that this "outline" by Cicero is anything special. Such passages can be found everywhere in ancient texts that discuss systematic matters.

Even though I have many problems with Ezra Pound, this observation of his (taken in isolation) seems right:

There is no use talking to the ignorant about lies, for they have no criteria.

Thanks to Attempts, where you also find a reference to the text in which the claim is found. I wasn't going to say this, but I must: "The trouble with the ignorant is, of course, that they don't know that they belong to the ignorant and thus go around quoting Ezra Pound." That's what makes this post a quandary.
Posted by MK at 9:33 AM No comments:

Here is a review of Markdown Pro. It compares this application to Mou and comes to the conclusion: "If Markdown Pro was made by Apple, and Mou by Samsung, these two would be in court in seconds. Fortunately for us, neither of these apps is likely to get blocked by the courts." Since Mou is free for now, it would be the hands-down favorite, were it not for the fact that Markdown Pro has 10 templates whereas Mou has only 4. I don't know why I like Multimarkdown Composer better. It does not even export directly to PDF. Perhaps it is because in the end I prefer Wiki Markup over Markdown, anyway.
Posted by MK at 9:06 AM No comments: