Nathan Jurgensen argued in November 2013 that "'Unplugging' from the Internet isn’t about restoring the self so much as it about stifling the desire for autonomy that technology can inspire." This idea is picked up by the New Republic this week.

I do like Jurgensen's article because it shows the inauthenticity of those who claim that the Internet stand in the way of their own authenticity. Whatever authenticity is, the only one that can stand in its way is the person striving to be authentic, if only because many of the ways of striving for authenticity are themselves inauthentic. In other words, the best way to attain something approaching authenticity is by not striving for it. It's like happiness that way. Directly pursued, it tends to lead you astray. Pursuing something worth your while, it might surprise you.[1]

In any case, "mindfulness" and "unplugging" are just slogans providing false promises—or so I would argue.


1. In other words, I have not given up entirely on the notion of "authenticity" yet. Perhaps I should.
Posted by MK at 9:59 AM No comments:

As I discussed in a previous post, Heidegger thought that typewriters are "signless clouds," and that the hand was essential for thinking. So, it might be thought that he was entirely opposed to new technology in writing. This would be wrong, however, as he did adopt fountain pens. While he seems to have used dip pens, steel nibs, and inkwells when writing Being and Time, he later clearly (also) used fountain pens.[1]

Photographs show that he later used fountain pens. There is a Web site that claims that he actually used a Kaweco Elite. "The Elite was Kaweco’s top of the line and enjoyed a special embossed pattern of stair-step lines that add both grip and visual interest to this pen ... I have a photograph of Martin Heidegger writing with a Kaweco Elite and writing with this pen has always given me the covert joy of using something very special that most folks would never recognize as such." This is possible, as Kaweco was big around 1925, though it declared bankruptcy in 1929. But around 1930, "230 workers produced the Kaweco -Kadett, -Colleg, -Dia, -Elite, -Carat, -Schulkaweco, -Helios and again the Kaweco- Sport."[2]

I have seen quite a few photographs of Heidegger's writing desk, but I cannot make out the precise looks of the pens on it. The resolution is just not great enough. It does appear to me, however, that he used more than one type of fountain pen. In any case, if you believe that the writing instrument determines what you think, then Heidegger may have produced Kaweco philosophy. But even I would not attribute that kind of thing to this controversial thinker. Just look at this: 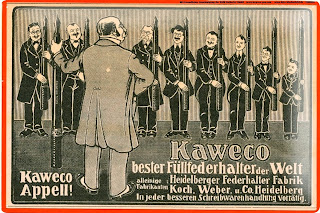 1. Thus, when he speaks in §15 of Being of time of "Schreibzeug" or writing "tools," he mentions "Feder, Tinte, Papier, Unterlage, Tisch ..." (nib, ink, paper, writing surface, desk ...). While this list does not prove he did not use a fountain pen at that time, it does indeed suggest that he was still using inkwell and dip pen. In any case, this practice would not have been unusual in 1925/26.
2. See here for more details.
Posted by MK at 10:51 AM No comments:

I posted some time about my my new favorite pen. One thing that is definitely an improvement over the Rotring 600 and the Rotring Newton is that it allows you easily to change the entire nib unit, and not just the nib. Like Levenger's True Writer line of pens, it mimicks the Esterbrook approach in this regard. What makes this even better is that the L-Tech (and the True Writers) will take any Standard #5 nib. I have recently exchanged the True Writer F nib for a TWSBI Mini Steel Nib Unit - Extra-Fine.

There were two reasons; (1) I like an extra fine nib, (2) the TWSBI Mini nib looks more like the nibs on the original Rotrings and thus better complements the pen. The True Writer nibs have wide shoulders, the TWSBI has almost no shoulders. It is not quite as elegant as the Rotring nib, but it comes close.

The operation is exceedingly simple. Holding the grip section in your right hand, with the nib up grip the nib (and fins) with your left thumb and forefinger. Turn the nib counterclockwise (or the grip and pen clockwise), and it will come out. Screw in the new nib section.

It is not unreasonable to suppose that lap desks were influence by writing boxes made in such countries as Japan, Korea, and China. Apparently, "boxes with compartments for an ink stone, ink stick, water dropper, and brushes, became popular during the Muromachi period (1392-1573)." They were often highly elaborate decorated with lacquer textures and finishes. Here is the picture of a very simple one that appeals to me. 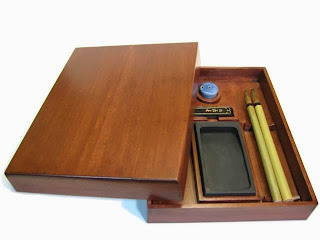 I was tempted at the last antique show in Brimfield to buy a much more elaborate one in metal. I resisted the temptation and am glad, as I need one of these implements as much as I need a hole in my head.
Posted by MK at 4:50 PM 1 comment:

In September 2012 I wrote about a supposed Victorian Laptop, and I surmised that they predated Victorian times. Here is an interesting page on writing boxes and their history that confirms my suspicions. From the Website:


Whereas the Tea Caddy and the Sewing Box can be said to be accurate reflections of the stylistic and cultural influences of the 18th and 19th centuries, the Writing Box epitomizes the social and economic developments of this particular period.

Portable boxes for writing materials had existed for many centuries and in many cultures. However it was not until the last decades of the 18th century that the socio-economic circumstances in England necessitated the wide use of a portable desk in the form of a box which could be used on a table or on one's lap. Hence 'Lap Desk'.

There is no reason why these implements could not still be useful today (to those who write by hand).

Decomposition Books are notebooks characterized by "a clever cover designs and a number of eco-friendly attributes ... Each book features 100% post-consumer-waste recycled pages that were manufactured in a mill powered by methane captured from a local landfill;
and soy ink printing, which contains fewer VOC’s (volatile organic compounds) than regular, petroleum-based ink and is
also easier to recycle." They are made in the U.S.A. 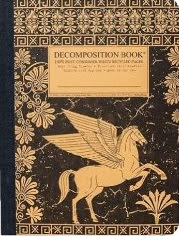 Their pages hold up well to the ink of even my wettest fountain pen. I recommend them, even though I find the format a bit large for carrying back and forth from home and office. They have as smaller format (4 x 3) as well. Alas, it is too small. What I want is something closer to A5. See this earlier post
Posted by MK at 11:18 AM 2 comments:

I probably reported on my fascination with most thing Rotring before. Rotring, a German company that was bought up in 1998 and is now part of Sanford which also acquired Waterman and Parker, made very distinctive writing instruments. This included not just technical graphing pens, like Isographs, but also mechanical pencils and fountain pens, like the Rotring 600 and the Rotring Newton.

Sanford shut down the manufacture and sale of fountain pens and mechanical pencils soon after taking over. Some of the products re-appeared as Parker pens, like the last incarnation of the Newton which became the Parker Facet, and the Rotring Esprit which became the Parker Esprit. There also is some Parker version of the Rotring Executive. The Rotring Tikky became a Papermate whose latest incarnation is called the "Papermate Precision."

While Sanford's decision on fountain pens seems final, they decided last year to re-issue to the rest of the world the drafting pencils that were for some time only available in Japan, namely the 300, 500, 600, and 800. You can also buy a new version of the Tikky at pretty much the same price. It is available in a greater variety of colors, but you cannot buy it in as many places. They seem pretty much identical. The only difference is that the Precision is missing the red ring (but you can tell where it would go, and where they have affixed a ring that has the same color as the rest of the pencil).

I like the most the 600 series of pens, as well as the first generation Newton that looks very much like a 600, is often referred to as a 600, but isn't a 600 at all. Indeed, I have collected quite a number of them. But I also have some interest in the Rotring pencils.

Recently, I had occasion to compare the new Rotring 300 pencil with a pencil that looks very much like it, namely the redcircle 300 ("redcircle" is a literal translation of "Rotring"). On eBay they do not use "300" to refer to this mechanical pencil, but they clearly are copies of the Rotring 300. Perhaps someone will find a comparison of the original and the copy of interest. The barrel and the cap look exactly the same. In fact, I believe that they are the same. It's just that the quality of the redcircle is uneven. (The selector for the grade of the lead on one of mine was defective, for instance.) It appears to me that they are using "seconds" or "rejects" of the Rotring 300. This is not good. One count against the redcircle.

On the other hand, the internals seem rather different. The redring's mechanism is made of plastic, the Rotring's is, at least in part made of metal. Accordingly, the redcircle has no place for an eraser under the cap; the Rotring has an eraser. Second count against the redcircle. Perhaps this internal difference makes the redcircle for some less of a copy and more of a "variation on a theme," but I have my doubts.

The tip of the two pencil is also very different, whereas the Rotring has the familiar tip with a fixed drafting pencil tip, like so: 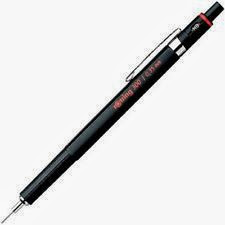 The redcircle has a retractable tip that makes it possible carry the pencil in a pocket without fear of being stabbed bit or damaging one's pockets, like so: 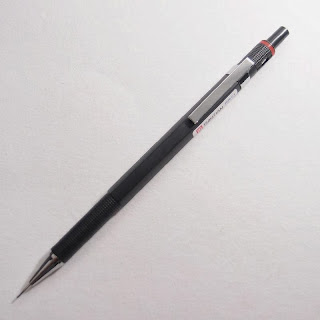 This is a count for the redcircle—at least in my book ... errr ... pocket.

Speaking of pockets, the redcircle costs about $5.99 or $9.99 for three from Hong Kong. The Rotring costs around $10.00, if bought in the U.S., and $6.99, if bought from a Japanese seller on eBay. Ultimately I think the original is a better deal (even though I like the tip on the redcircle much better).

Now, if only there were good copies of the 600 pen, then I would be really tempted. I would be even more tempted, if Parer were to make new 600s (even if I like the L-Tech very much)!
Posted by MK at 3:55 PM 6 comments: 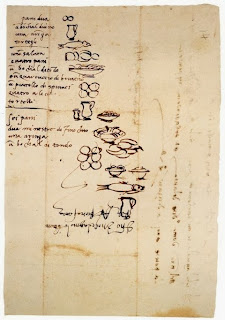 Apparently, his servant was illiterate. Hence, the pictures.[1]

"Handwritten amended pages are no longer acceptable at the European Patent Office (EPO), as of 1 January. Under the European Patent Convention, applicants were required to submit typed or printed descriptions, claims and abstracts but handwritten amended pages were admissible during proceedings, and were common during oral proceedings. However, the EPO has now stopped this practice as it intends to produce the text of the patent electronically, and therefore needs all pages in a form that can be processed."[1]

Is this a trend?