Back to Beach Balls

No, I don't mean the kind my grand children are using at the beach in South Carolina, but the ones you get to see when your Mac takes some time to load a program or complete a task. My Mavericks setup which worked like a charm until about three days ago is now broken. The computer kept crashing regularly since that time. It clearly has to do with Parallels. It corrupts the windows image file. I restored it twice, after which it worked for a while. But then Parallels corrupted the image again. I believe this problem has to do with a recent update, but I don't know. Information about what got updated when in Parallels is scarce on the Internet.[1] I have Version 10.2.1 (29006). One of the error reports mentioned Kekst signing, Apple's excuse for "security."

In any case, I have had to revert to Yosemite and can't use SSD.

Needless to say, I am not happy!

One day later: The problem does not seem to be caused by Parallels, after all. The crashes continued in Yosemite. The likely culprit is USB 3.0. Others are having those problems too. After disconnecting all USB drives, I have not had a crash (in a few hours). 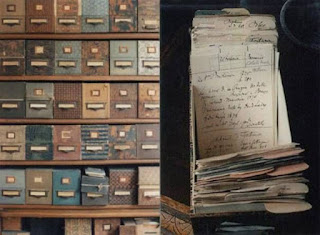 Aby Warburg (1866-1929) was a German art historian of some fame. He also kept his research in a kind of Zettelksten. Yet his method was rather different from that of other people discussed in this blog. For one thing, he decorated his boxes with different kind of materials. Secondly, they were not always kept at one place. Apparently, he took some of them on his extensive trips. Thirdly, contrary to Luhmann's method, his index cards had no firm place. He constantly re-arranged them in accordance with different criteria. Fourth, and this is related, he used a hierarchical system, even though his hierarchy would strike many as rather arbitrary and idiosyncratic.[1]


1. For the detailed discussion of one of his Boxes (in German), see here. It's concerned with Box, number 2 (which deals with conceptions of history).
Posted by MK at 6:05 PM No comments:

A Zettelkasten in Sublime

Dan Sheffler has developed an interesting approach for note-taking in Sublime that is modeled after Luhmann's Zettelkasten. While he writes everything else in markdown, he has developed a plugin to make links by enclosing them in double brackets "work in Sublime Text. You can get the plugin on GitHub."

I also like his way of splitting longer notes by creating "new notes that branch off the parent note by adding a hyphen to the original name. For instance Plato - Psyche.md is a child of Plato.md."

Recommended reading!
Posted by MK at 4:56 PM No comments:

I have never seen a frontal picture of the Luhmann's three index card boxes. Recently, I came across one. Here it is: 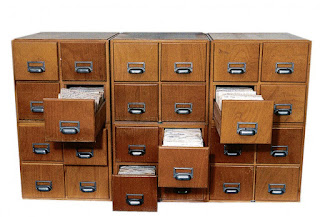 It does not look like much, but it is supposed to have been full to the brim with 90,000 notes. My ConnectedText Project looks even less impressive, and not just because it contains only 10,000 notes.
Posted by MK at 7:28 PM No comments:

Crossover for the Mac

Crossover for OS X is an interesting application. I recently trialed it. In particular, I was interested in how well it would run ConnectedText. It's listed as compatible with a silver predicate (the others are untested, bronze, and gold).

Crossover did a fairly good job. ConnectedText ran without any problems, and it ran as if it was an OS X application. Thus Textexpander macros worked flawlessly.[1] And I would be tempted!

There was only one problem I could not get past, and that was the abysmal handling of fonts. Text just looked downright ugly and cheap. The fonts look very rough. No smoothing at all. This alone would keep me from using the application, even though its price of $59.95 is rather attractive compared to the alternative of running Windows on Parallels or VM Ware (or even Virtualbox) which needs a full copy of Windows Which alone easily costs two or three times as much as Crossover.

I installed true type fonts, but it did not make a difference. Apparently, there are ways of smoothing fonts in Wine, and apparently there are ways to get this done in Crossover. But I could not do it. And it's not just a problem for ConnectedText.

In my judgment, it is that this font problem that holds back Crossover from true success in the market place. I, for one, will not be tempted to buy it, unless it is fixed.

1. See also this discussion in the ConnectedText Forum.
Posted by MK at 7:12 PM No comments:

Of late, Firefox has become almost unusable. It has slowed down to a crawl and often does not succeed in loading pages. I am using the OS X version, and I did disable "hardware acceleration at one point (as recommended), but it continues to be unreliable. Accordingly, I must use Safari, even though I'd rather use Firefox.
Posted by MK at 9:36 AM 3 comments:

I posted a version of this picture before. But here it is again in a larger format: 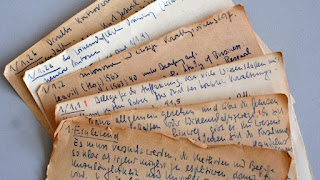 You can clearly see the numbering scheme (and the titles Luhmann also put down).
Posted by MK at 9:08 AM 2 comments: