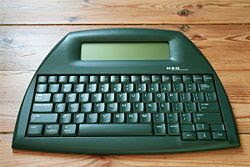 I am using a Neo Alphasmart for Notetaking in the library and on the train. Why?

It is Affordable. At $219, it's only a fraction of the cost of a standard laptop (though one might argue it is still a bit pricey).

It is Flexible. I can send text directly to a PC, Mac, or USB printer by USB cable.

It has incredible battery life. Up to 700 hours on 3 alkaline batteries, or up to 300 hours using the rechargeable battery option. The last set of batteries lasted almost a year!

It is simple. Instant on/off, autosave, one-touch file access keeps you on task. I especially like the instant on/off. No boot-up, no waiting, just start writing. And nothing to distract you. No Web-Access, no games.

It is small. About half the size of a normal laptop. (It is also not very heavy.) The screen may be small, but it's more than enough for taking notes and writing small scraps of text. What is more important than having a big screen is that it has a real full-sized keyboard.

Now, it does not do much, except allowing you to write text, but that's all I want for note-taking. It does not do italics, bold or other formatting, but since I use the wiki-markup for later inclusion in ConnectedText, it does everything I need to do on the road or in the library. While it was designed for kids in grade school, it is used by many serious writers .

The company also has something fancier, called "Dana," which has almost all the distractions the Palm operating system has to offer, and that I don't need.

I used to own a Tandy WP 2, which did everything the Alphasmart Neo does - and more. But exchanging information between the computer and the WP 2 was never easy, and it got more difficult as more advanced operating systems emerged. So I stopped using it, and gave it to one of my nieces. This is a perfect replacement.
Posted by MK at 11:18 AM