I had come across this before. But this is a very clear description of the Time Sort (Noguchi) Filing System.

No further comment!
Posted by MK at 9:05 PM No comments:

Here is a scholarly paper that investigates the "foundations" of the effective use of concept maps.[1] I am a bit dubious about "foundation-talk" applying to "effective use" or "tools," but I guess "foundation" means something different in educational psychology from what it means in philosophy. In any case, the paper contains some interesting observations.

Still, the distinction between static and dynamic maps seems to be me worthy of further thought. And it does seem to be true that when "we focus on events, we are usually asking how something happens, and concept maps emphasizing events, using verbs, ... tend to be richer in explanations, whereas concept maps focused on objects tend to be more descriptive." It may also be true that concept maps showing explanations require deeper or more dynamic thinking. 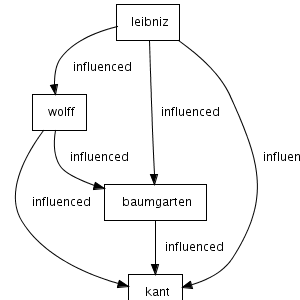 There are some ways to modify the resulting diagram, you can drag it into your desktop applications or reference it and include it in your Website, but I think the diagrams cannot be too elaborate, i.e. not much more elaborate of what you see here. Interesting idea, though.

I'd wish there was a desktop application like this.[1]

According to common wisdom, Outliners and Hypertext are contradictory or at least contrary. Outliners unify information and provide clear insight into its structure, while “there is a point at which wikis become more trouble than the’re worth and they end up creating a mass of organized but fragmented information.”[A comment by Jack Crawford in the Outliner Forum that I frequent.]

It is true, a Hypertext or a Wiki allows for “unlimited internal branching,” since it does not commit you to a pre-defined structure. It also allows for meaningful clusters among the pieces that make up the information, while at the same time always keeping open the possibility of structuring and re-structuring the information (like an outliner). But there is not contradiction between this and outlining.[1] Perhaps it might be said that a a hypertextual (or wiki-like) database is like a two- or many-dimensional outliner. Hypertext and outlining are thus complementary and not opposed (as common wisdom has it).

Perhaps a picture is worth more than a thousand words. Here is a Graph of some of the Information of my Database in the newest version of ConnectedText (version 4) that will come out every day now: 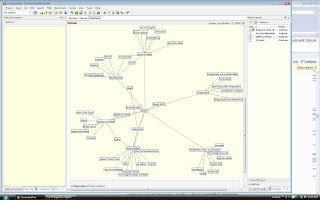 It just presents the first two levels of branching in a database of almost 8000 entries. Clicking on any of the boxes will take you to the topic it refers to, which could have graphs that show even more detail.

Properly constructed, a wiki does not lead to fragmented, but to deeply connected information, like a multi-dimensional outliner.

On the Writing Process

An interesting post on Daily Writing about the "writing process." It identifies "five stages of writing" as "a framework for writing well and easily."

They say: "You might want to bookmark this post so that you can come back to it each time you start on a new article, blog post, essay or story: use it as a checklist to help you." Not a bad idea.

No further comment!
Posted by MK at 7:28 PM No comments:

Montesquieu on Notes and Principles

Montesquieu wrote in the Preface of The Spirit of the Laws: "I have begun and abandoned this work [Spirit of the Laws] any number of times. On a thousand different occasions, I have taken pages and thrown them to the winds. Every day I have felt my paternal hands fail. I followed my objective, but without forming any fixed plan. I could identify neither rules nor exceptions to them; I found the truth only to lose it. But once I discovered my principles, everything I had been seeking came to me, and in the course of twenty yeas, I have seen my work begin, grow, advance, and come to its end."

Almost anyone who has ever worked on a large project can probably identify with these sentiments. But Carl L. Becker is one person who could not. Thus he accused Montesquieu of fudging "the facts." He sneeringly observed that "the 'facts' meant nothing to him until he discovered the principles which they were to illustrate." (See The Heavenly City of the Eighteenth-Century Philosophers. New Haven: Yale University Press, 1932), p. 104.) He then goes on to accuse the enlightenment philosophers on the basis of this passage that they started from general principles and not from facts, even though Montesquieu's passage shows just the opposite, namely that he wrestled with the facts until he could formulate general principles.

But there is a difference between (i) searching for the principles that might explain the facts, and (ii) seeking principles that might be illustrated by the facts. The first approach is an attempt to establish a necessary relation between facts and principles, the other approach is interested in the accidental relation of embellishment. It is important to understand this difference in one's research, even if one might also be skeptical about the possibility of the kind of explanation Montesquieu aimed at.

Becker's main thesis, namely the claim that "the philosophes demolished the Heavenly City of St. Augustine only to rebuild them with more up-to-date materials" (31) is well-illustrated, but it does not serve to explain a whole lot about the enlightenment.

Reading Montesquieu is more profitable.
Posted by MK at 3:17 PM No comments:

They say: "Gazette is a small, fast, personal wiki for keeping notes, & whatnot. Gazette 'folds' a document into pages, and allows you to cross-reference those pages in any order. This folding/linking metaphor makes it easy to have several topics within a single file, an ideal method for organizing information, creating glossaries, distributed documentation, courseware, cheatsheets, ebooks and more..."

I say: The price, $22.95, is far too high. The program does nothing that The Notebook does not do (better) for free. And it doesn't do many of the things that The Notebook does. Zulupad is the personal wiki application with the most stupid description. It's supposed to be "a notepad on crack"—whatever that may mean. Still, it is both cheaper ($15.00) and more capable as well. I would say that even the free version of Zulupad is just as capable as Gazette

But, if you are willing to spend $22.95, you would be far better off purchasing ConnectedText for just a few dollars more ($29.95). It is ultimately a much better value than any of the others mentioned in this post.

1. Sunday, November 01, 2009: The Website seems to be down. But it can still be downloaded from here: Brothersoft.

Update: The link has gone dead and the application is no longer available. I noticed it on February 1, 2015, but it was probably dead for a while.
Posted by MK at 3:42 PM 1 comment:

An artificial distinction? See also Fluidinfo, which is supposed to be a "cloud database," but not a wiki.

Without further comment!
Posted by MK at 11:18 AM No comments: