A free version of MS Word and Excel? You can download it here. It does not have all the bells and whistles of the full version, but that may be a good thing.

It also serves advertising; and that is perhaps an entirely different matter.

Calepin, a Blog Tool for DropBox

Just came across this. It looks promising. I wonder whether it can do a private blog, i.e. A blog that only the blogger herself/himself can read.

No further comment!
Posted by MK at 12:12 PM No comments:

Boxer is an application that is designed to play DOS Games on OS X. It also works well with old Dos Applications. In fact, it works better than DOS Box on the PC, even though it's just a "wrapper" for DOS Box. Agenda: 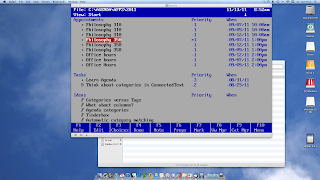 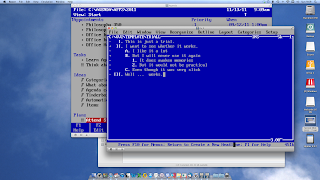 It's a much better way to run old DOS programs than using a virtual machine because it has much leads overhead. Back to work!
Posted by MK at 8:57 AM No comments:


To be filed under the heading of "rather weird but intriguing:" Hermann Hesse's Magister Ludi or Das Glasperlenspiel is a strange novel about an intellectual or cultural game that is never made quite explicit in the book itself. It had a weird hold on me when I was eighteen or nineteen (and I hope it had nothing to do with the implicit decision I made about that time to pursue "philosophy").

The idea is vague to enough lend itself to all kinds of interpretations and adaptations. Lewis H. Lapham wrote in 1997 for Harper Magazine an essay called "The Spanish Armadillo" in which he exulted its virtues in an age of cultural forgetfulness and illiteracy, claiming it "lends itself so obviously to the transcendental aspirations of the Internet" that it probably would only be "a matter of months before Microsoft" would buy the rights to the name for one of its software titles. Microsoft didn't, of course. Neither did Apple. Their HyperCard Program was perhaps closer to this idea than anything  Microsoft had developed at that or any time.[1]

Lapham also referred to Charles Cameron, a game developer, interested in developing the game for the computer. I am not sure whether anything came of this, but the Website is still there: What Lapham said, Explaining the Glass Bead Game and Approaches. It's all interesting in a weird way. The reference to Michael Heim's The Metaphysics of Virtual Reality does not help. In fact, it spoils it for me.


1. Hesse: "This same eternal idea, which for us has been embodied in the Glass Bead Game, has underlain every movement of Mind toward the ideal goal of a universitatis litterarum, every Platonic academy, every league of an intellectual elite, every rapprochement between the exact and the more liberal disciplines, every effort toward reconciliation between science and art or science and religion." If Lapham and Cameron are right, it also underlies some Hypertext. Now, a transcendental wiki ... that's an idea.
Posted by MK at 6:34 AM No comments:


The Content Strategist as a Digital Curator is an interesting paper on the idea the "just as curators produce thoughtful exhibitions that juxtapose pieces of work against one another to create meaning and spur excitement, content strategists must approach a business’s content as a medium that needs to be strategically selected and placed to engage the audience, convey a message, and inspire action." It's supposed to hold for anyone who creates "content."

I don't know what I think of this. Every creator her own curator?

AutoNotes seems to be a little-known personal wiki for OS X. It is part of the Automate suite (which I tried but found on the whole rather buggy). But AutoNotes works as a notepad for quick thoughts and notes. You just have to press F1 for creating a new note. It links automatically to existing notes.

Creation of new notes could be easier. I would prefer if it allowed enclosing words or phrases in double brackets, like nvAlt and, more importantly, ConnectedText. I like it better than nvAlt for quick notes because it is more simple (and I have no use for MultiMarkdown or extensive search abilities). It's just for quick notes and reminders that will either be deleted or imported into ConnectedText.

It saves notes as text or rtf files to any folder. I am not sure whether I need this capability. For the moment I have AutoNotes save the notes to DropBox so that they are available on any of my computers.
Posted by MK at 9:21 AM No comments:

What is Wrong with American Universities?

I don't usually comment on politics or daily affairs, but I cannot resist today. One CNN headline reads: "Penn State students take to streets after Paterno, president lose jobs." This headline beautifully illustrates the order of priorities in higher education. Paterno, just a football coach, seems to be more important than the president of the university.

It almost appears as though football is the most important "business" of the university. It isn't. Not by a long shot. It would be a very good thing, if large universities in America were to remember what their primary role is: education and research. Football is just a diversion — something that should be secondary.

Nor have I ever thought that the competitive sports are good for the moral well-being of universities. Penn State has stayed clear of scandals involving grades and money, but it is painfully obvious that the culture of competitive sports allowed a pedophile to prosper as long as it did not interfere with business as usual, i.e. winning football games. This is what is wrong — and not just at Penn State.

I don't have much use for a laboratory notebook  but I have a passing interesting in the practice. This post seems to me right on.

No further comment!
Posted by MK at 6:35 AM No comments: