"My two fingers on a typewriter have never connected with my brain. My hand on a pen does. A fountain pen, of course. Ball-point pens are only good for filling out forms on a plane."

I agree with him on ballpoint pens!
Posted by MK at 11:00 PM No comments: 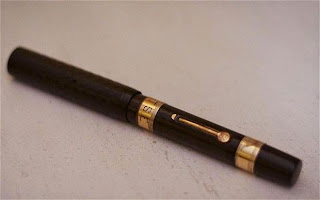 Apparently, it was given to him by his mother when he first went to school, and he used it all his life.[1] I am sure it explains neither his life nor his poetry.

Hemingwrite "is-a single purpose, distraction-free writing composition device. It combines the simplicity of a 90s era word processor with the modern tech we all require like cloud backups and integration into our favorite document editors like Google docs and Evernote."

If it integrates with Google docs and Evernote, it is an improvement over the Neo 2. But the form factor seems regressive. It's too bulky. Why does it actually have to look like a typewrier?
Posted by MK at 8:27 PM 1 comment:

Here is a description of how and why you should you create create your own index in the books you read. It's an approach I have followed for many years. There is one further step I take: Anything that I have noted in this way I transcribe into ConnectedText. It's not "rocket science" by any means, but it is worth to be repeated.

No further comment!
Posted by MK at 12:02 PM No comments:

In Praise of the Kindle 3

In October 2010, I broke down and bought a Kindle 3 (with the chiclet keyboard). That is now four years ago. While I do not do all my reading on it—I like real books better in many ways, and I have a Kindle application on all my other electronic devices—I have regularly used this version of the Kindle, reading regularly some journals and papers (like The Atlantic and the Times Literary Supplement) on it, as well as some books that I did not buy as hard copy. There isn't a week in which it does not get some use.

I have never regretted buying the Kindle 3. Nor have I ever felt the need to update it. Though I have played with the Nook, I have given the ones I had (because of Barnes & Noble gift cards) to relatives. The Kindle 3 is a device that just works. I can easily see myself using it for another four or even eight years. There are not may electronic devices of which I could say this.
Posted by MK at 8:33 PM No comments:

It is not easy physically to change a hard drive in the Mac Min (2012), or perhaps better: it is not for the faint of heart. There is, however, a way of change your boot drive to an external SSD by just changing the Startup Disk in System Preferences. I have done this for a number of years. My latest configuration is a Vertex 3 Series VTX3-25SAT3-120G connected to a Seagate Thunderbolt adapter (Model: STAE128) and a Thunderbolt cable to the Mac Mini (or to an Apple Thunderbolt Display).

The computer boots up very quickly and you never see Apple's equivalent of the hour glass after setting up the drive as your system drive. An internal SSD might be slightly faster, but I doubt this would be noticeable.

The ability to specify any disk as a start up disk is one of the strengths of OS X. I just hope that it will not be axed in the future so that the borders of the Apple Ecosystem are closed even more to third-party "infringements."

The new Mac Mini (2014) is praised as a significant upgrade in most of the early reviews. And there are some improvements, most notably two Thunderbold 2 ports, (slightly) improved graphics performance in the two lower-priced models (Intel 5000 integrated graphics rather than 4000), and (even more) improved in the higher end model (Intel Iris Graphics). However, there are two changes that I can only consider as evil: You could easily upgrade the RAM yourself in the models from October 2012 or earlier. Apple has eliminated that possibility. In other words, you now MUST buy the ridiculously over-priced memory models and pretty much have them installed at the apple store (though I am sure that clever users will find ways to circumvent this). Nor is there a four-core processor option available any longer.

The last two "improvements" will keep me from buying the new model. I will stay with the four-core 16 GB 2012 model I now have until the next "upgrade" or until I buy another non-Apple computer. The last decision will depend, of course, on the next version of Windows. I can't stand Windows 8.

Update on October 19th: See also here. The Ram is soldered into the motherboard. The screws at the bottom of the device have been so modified that they are "tamper proof." Opening up a Mac Mini to change the hard drive means a voided warranty. That means no Mac Mini for me any longer, and probably the end of my Mac experience (after the Mac Mini 2012 will be obsolete—which may, of course be a while). I do like the the operating system, but not so much as to give up any possibility of modification. Case closed—no pun intended :).

Saramago on Typewriter versus Keyboard

"The truth is, I had no difficulty in adapting to the keyboard at all. Contrary to what is often said about the computer compromising one’s style, I don’t think it compromises anything, and much less if it is used as I use it—like a typewriter. What I do on the computer is exactly what I would do on the typewriter if I still had it, the only difference being that it is cleaner, more comfortable, and faster. Everything is better. The computer has no ill effects on my writing. That would be like saying that switching from writing by hand to writing on a typewriter would also cause a change in style. I don’t believe that to be the case. If a person has his own style, his own vocabulary, how can working on a computer come to alter those things?" José Saramago, in an interview in the Paris Review, The Art of Fiction No. 155.

My sentiments exactly. I also need a paper copy in the end!
Posted by MK at 11:14 PM 3 comments: