in the Guardian William Boyd said in an interview:


I write my first draft of a novel in longhand. I have found the perfect pen that goes by the bizarre name of a Rotring Tikky Graphic with a 0.2mm nib. It suits my tiny, near-illegible handwriting and I always write in spiral-backed marginless A4 notebooks – I try to keep my fetishes to a minimum. 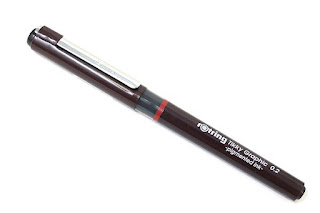 One great advantage of a longhand draft is that, in transferring it to the computer, every single word is written at least twice. Then the computer draft can be endlessly revised. Writing in longhand is important, I think – and not just because I’m a pre-computer novelist (I bought myself my first typewriter, an Olivetti, for my 21st birthday). In handwriting there is a vital head-hand-page connection that a keyboard and computer removes. When you write in longhand you’re unconsciously aware of aspects of your prose – such as sentence length, cadence, rhythm, repetition, prolixity – that I find keyboard writing doesn’t alert you to in the same way. Also you can see all the litter of the progress you’ve made that day – the scorings-out; the arrows; the insertions; the bubbles; the second, third, fourth choices. The page reflects the mental effort that the screen doesn’t. It’s a toiling, messy business writing a novel. I go to bed knackered and sleep well.

All this sounds very sensible to me! You need more than one draft for any kind of writing--or so it seems to me. And how you write your drafts seems highly subjective.

There is an enthusiastic review of Ulysses at Lifehacker. According to it,


Ulysses isn’t exactly a plain text editor. For a long time, the pitch for Ulysses was “plain text enhanced,” and while I hate to succumb to advertising catch phrases, that does describe Ulysses well. It’s a smarter version of plain text that can work as just plain text, or handle much more if you want it to. More than that though, Ulysses is an entire environment for writing. To use Ulysses well, you’ll want to dump everything, from your notes to your book manuscript, into Ulysses.

The author thinks it's also great for taking notes because


On top of having a solid system for organizing your writing manually, Ulysses also has an incredibly powerful little search program inside of it. Tap Command+O and type in your search. The results will include any text with that search term. Find the sheet you want, press Return, and Ulysses takes you straight into the text editor for that document. This doesn’t sound like much, but it makes so you can easily bounce between sheets without ever touching the mouse, which is useful when you just want to write.

In other words, it has simple search only. No "not", "or", or "and". No regex either.[1] So, how many notes is it good for? Hundreds, thousands, tens of thousands? I would think it may be a few thousands.

Perhaps this is just my prejudice, but I am not interested in any application that supports just a few thousand of notes. A life-time of note-taking needs an application that can manage tens of thousands of notes or more.

There are too many apps that suggest they are capable note-takers but which are severely limited. Take Growly Notes, it is severely limited in the size of its notebooks: "For example, if you’re keeping class notes in Notes, don’t keep an entire semester’s classes in one notebook. Make a folder in the Finder for each semester and make one notebook for every course. This will keep the size of your notebooks down, which will make Notes faster. It also makes it possible to close the notebooks you’re not currently using, which will also make Notes faster."{2] This means it is not a serious alternative to OneNote, for instance.

Pens and the Placebo Effect

There is a study showing that "Novices play better golf when they have expensive brand name equipment, research shows. Brand name products alleviate some performance anxiety but brands have no effect on better players."[1]

It may well be the other way around with pens and writing--I think. Experts may benefit more from their favorite tools than novices.

In any case, this "phenomenon" also deserves a study--or so I would argue!

A Literary History of Word Processing

in the review of a new book on word processing: by Matthew G. Kirschenbaum, called Track Changes: A Literary History of Word Processing and published by Harvard University Press, we find:


Writing in The New York Times Book Review, Louis Simpson warned that the word processor “tells you your writing is not final. …  It enables you to think you are writing when you are not, when you are only making notes or the outline of a poem you may write at a later time.” By contrast, Jacques Derrida reflected on this mutability with delight: “Previously, after a certain number of versions, everything came to a halt—that was enough. Not that you thought the text was perfect, but after a certain period of metamorphosis the process was interrupted. With the computer, everything is rapid and so easy; you get to thinking you can go on revising forever.” Simpson and Derrida agree on the formal features the word processor offers: They just disagree about whether the machines are good for writing.

Perhaps, but I doubt either one characterized the nature of the difference between writing on a typewriter and a word processor quite correctly. The word processor does not tell you anything. It does not radically erase the difference between making notes, outlines, and the final product. It appears to me that there is and always has been ambiguity about whether a certain formulation is just a note or whether it represents the final product, whether it is a penultimate or ultimate draft. And, yes, word processing makes revising much easier than the type writer, but only a fool thinks that you "can go on revising forever." You may go on for longer than you used to, but it is impossible to go on revising forever. You can't because your time is limited, and that is a brute fact, even if you are using a word processor.

The differences between traditional writing and word processing seem more gradual to me than either Simpson or Derrida suggest.

None of this reflects on the book (or even the rest of the review), of course. I am looking forward to reading Track Changes: A Literary History of Word Processing.

Cao Pi wrote in the third century AD in an Essay on Writing: "Life and body are limited by time, unlike writing which is eternal. Therefore writers gave over their bodies to ink and brush, and materialized their thoughts in tablets and collections."[1]

I like the phrase "materializing their thoughts," though I would perhaps prefer "externalizing their thoughts." The reason is that material to us is just as little eternal as our bodies. Tablets may outlast us, but they are far from being eternal. But tablets and collections allow us to manipulate thoughts and communicate them over the centuries.

There is a rather similar sentiment in Samuel Butler's Notebooks, even though it might seem to contradict Cao Pi.[2] Butler claimed that in pure thought we come "as near to God as we can get; it is through this that we are linked with God." But "the highest thought is ineffable; it must be felt from one person to another but cannot be articulated" (at location 1384). We cannot really do anything with such iintuitive thoughts. But, "the moment a thing is written, or even can be written, and reasoned about, it has changed its nature by becoming tangible, and hence finite, and hence it will have an end in disintegration (at location 1386). For him, words were "organised thoughts, as living forms are organised actions. How a thought can find embodiment in words is nearly, though perhaps not quite, as mysterious as how an action can find embodiment in form, and appears to involve a somewhat analogous" (at location 1391).

I have written many time about "exteriorization" before, of course.


1. Quoted in accordance with Alexander Monro, The Paper Trail: An Unexpected History of a Revolutionary Invention (New York: Knopf, 2016) p. 31.
2. See also the previous post on Samuel Butler.
Posted by MK at 11:18 AM No comments: